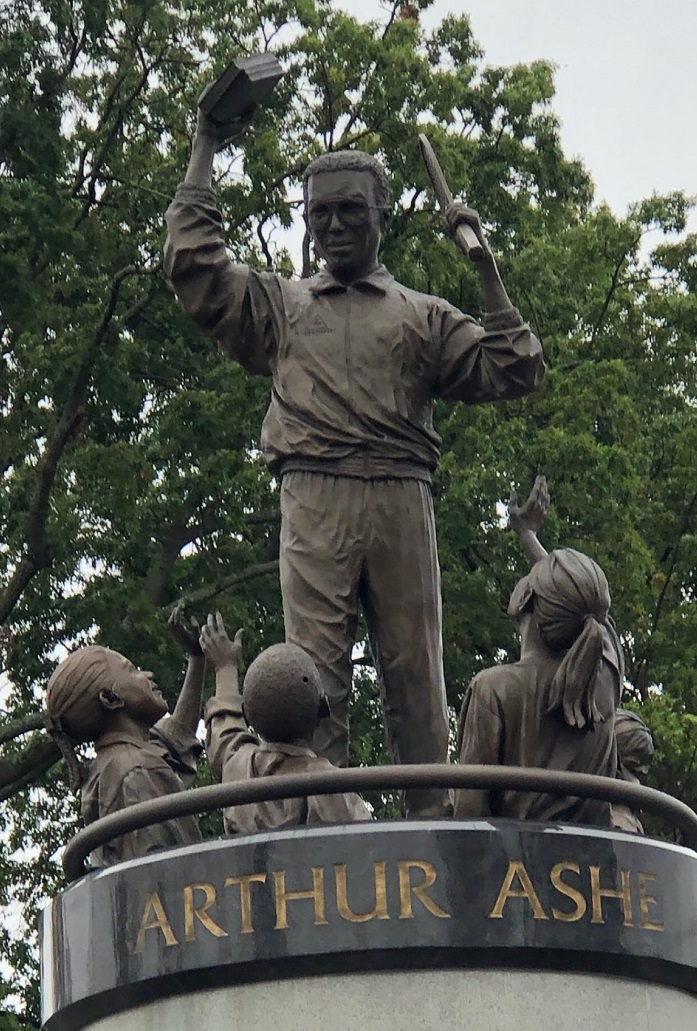 When I was a high school tennis player my hero was Arthur Ashe.  I played with his Head racquet, hoping to replicate his power and grace on the court.  Unfortunately, my similarities with Arthur on and off the court were few and far between.

Arthur Robert Ashe, Jr. was so much more than a phenomenal tennis player.  As an athlete, he is a member of the International Tennis Hall of Fame, having won three Grand Slam titles, achieved the number one ranking in the world and served as captain of the U.S. Davis Cup Team.  He may have played within the lines in tennis, yet his impact on the world was beyond the court.

His leadership as a humanitarian is his true legacy. What can we learn from this great leader?

Last month I was in Richmond, Virginia and decided to dig a little deeper into the life of Arthur Ashe.  His burial site is a basic plot in a nondescript cemetery outside of the city – you could easily miss it.  His final resting place mirrored his life – simplicity, humility, and grace.

His memorial is on Monument Avenue, along the same majestic street adorned with large statues from the Civil War.  His statue is much smaller than General Robert E. Lee and others, and in his hands are a tennis racquet and a book.  No firearms, no horse. Just a quiet simplicity.

On December 3, 1992, two months before his death, Arthur Ashe announced the creation of the Arthur Ashe Institute for Urban Health (AAIUH) in response to concerns about health care delivery in urban America. He knew that a disproportionate amount of illness and death from preventable diseases in our nation’s mult­­i-ethnic communities was not only caused by inadequate health care delivery, but also by late detection – the result of limited and, too often, culturally inappropriate health education information.

Arthur Ashe died at 49 years old from HIV AIDS, contracted through a blood transfusion following heart bypass surgery.  Upon learning his diagnosis, he resolved to teach others about HIV and AIDS, including the founding of AAIUH.  He knew his life would be short and he faced his mortality by embracing his own definition of being a hero – he served others whatever the cost.

Three keys to leading with grace:

Grace is defined as a simple elegance or refinement of movement.  These are the people who make life look so easy, almost effortless.  The truth is the effort has already been invested – countless hours of preparation through success and failure.  The greatest leaders diversify their development to convert complexity into simplicity – enabling others to understand and excel.

Effective leaders choose the right path, rather than the easy path.  When Ashe was diagnosed with HIV AIDS, the victim of a medical error, he chose to lead rather than seek pity.  He persevered through a lifetime of racism as well, choosing to be part of the solution.  His message was simple – whatever the cost.

Sometimes you hear certain leaders choose style over substance – they talk a good game yet do not have what it takes to back up such talk.  Graceful leaders are formed through authenticity and expertise.  They give more than they take.

While my Arthur Ashe Head racquet is no longer in my hand, his spirit continues to beat within my heart.  He inspired the importance of simplicity, courage, and substance in my leadership journey.  May the grace of Arthur Ashe be with you, and may you lead others as he led us.